Corvus Thanks Our Veterans 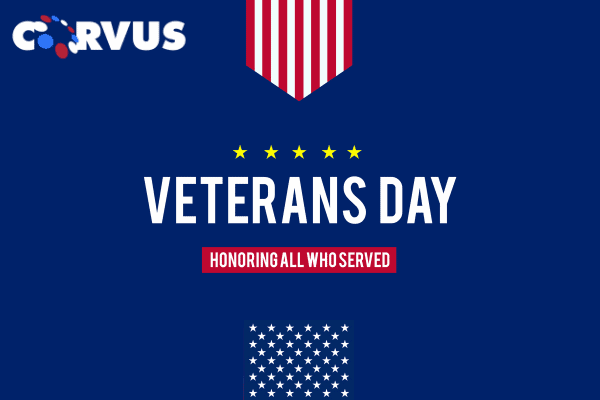 As we observe Veterans Day this year, Corvus would like to express our wholehearted gratitude and deepest respects to all our Nation’s veterans and their families. The courage, heroism, selflessness, and love of country of those who have served allows all of us to sleep peacefully at night and to wake up every day in a free society.

Veterans Day, observed annually on November 11th in the United States, is a day for reflection, remembrance, and respect. Veterans Day was originally celebrated as Armistice Day on November 11th, 1919, to mark the end of World War I on the “11th hour, of the 11th day, of the 11th month”, established by the Treaty of Versailles, in 1918. Initially declared by President Woodrow Wilson, the purpose of Armistice Day up until 1945 was to honor the fallen warriors of WWI. Armistice Day was officially made a federal holiday on May 13th, 1938.

In 1945, Raymond Weeks, a veteran of World War II, led a delegation to General Dwight D. Eisenhower proposing expanding Armistice Day to recognize and celebrate all American veterans. He organized the first ever Veterans Day celebration in 1945 and continued to do so until his passing in 1985. Weeks is considered the “Father of Veterans Day” and he was awarded the Presidential Citizenship Medal in 1982 by President Reagan.

Armistice Day officially became Veteran’s Day on May 26, 1954, when now President Eisenhower signed a bill presented by U.S. Representative Ed Rees of Kansas amending the 1938 act by replacing “Armistice” with “Veterans”. 1954 also saw the creation of the National Veterans Award, and the first recipient was Congressman Rees for his efforts to make Veterans Day a federal holiday.

Veterans Day is an opportunity for all of us to reflect upon and honor the contributions – past, present, and future – of American Veterans. Their service to our country does not stop when they leave the armed forces. There are approximately 19.5 million veterans in the United States; they are community leaders, business owners, coaches, mothers, fathers, husbands, wives, sons, and daughters. They bring their sense of honor, duty, and loyalty to the common good with them to civilian society, and we are a better nation because of the veterans in our midst.

A special thanks to:

In addition to the above, Corvus extends our humble appreciation today to all our veteran partners, teammates, stakeholders, and their families; it is the highest honor and a great privilege to work alongside you – you personify Corvus’ mission to Make Lives Better.

We would also like to express our appreciation to the International Franchise Association and the IFA Foundation for their support of veterans through their VetFran initiative, which aims to “facilitate the transition of veterans into franchising by encouraging franchisors to offer discounts and incentives to veterans…and to assemble resources, tools and a database of franchising opportunities for veterans”. Corvus is proud to be a VetFran member organization and to offer a 20% discount to all our veterans.

Please take the opportunity today to thank the veterans in your life for their service – they risked their lives for our fundamental freedoms with honor, bravery, and an unwavering commitment to their country. Check out the resources below to learn how you can help support our former service members this Veterans Day.

Resources to Support Our Veterans: