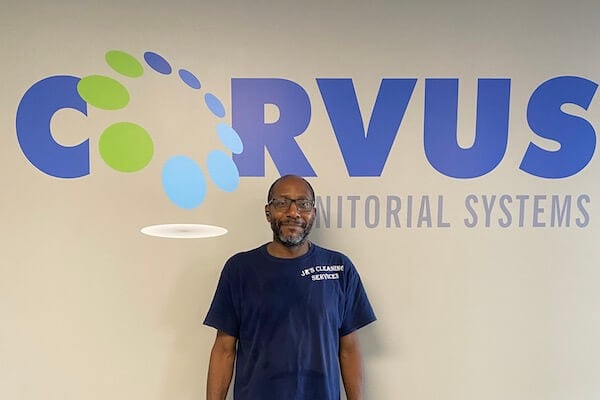 January’s Franchisee Spotlight Series features Corvus of Indianapolis Franchise Owner Marcos Henderson. Read on to learn more about the standout Franchisee who goes above and beyond to Make Lives Better!

Mr. Marcos Henderson has made a tremendous impact in the Indianapolis market since opening his Corvus Franchise last year.

His keen attention to detail was clear from the very start. At his disclosure, Mr. Henderson took thorough notes and asked many questions. According to Executive Director, Mr. David Villafana, Mr. Henderson’s focus on providing the highest quality customer service is what makes him stand out. He is always on time for his cleans and treats his clients with the utmost respect. And, if any issues do arise, Mr. Henderson does not wait until his next scheduled clean to address them. He responds immediately and does whatever it takes to find a solution to the problem.

Mr. Henderson has not received any complaints or negative feedback, however, he is very open to ongoing training and always willing to learn new things. With a positive attitude like this, we have no doubts that Mr. Henderson will develop a wide skill set and continuously grow as a business owner.

Thank you, Mr. Henderson, for the impact you make in Indianapolis! Everyone at Corvus is grateful to have you as a part of the team, and we look forward to watching your continued success!