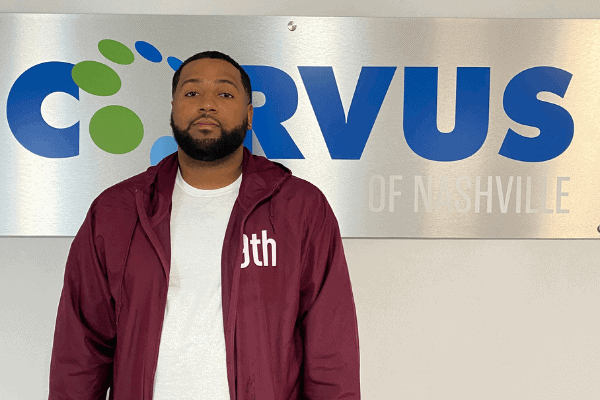 This month’s Franchisee Spotlight goes to Corvus of Nashville Franchise Owner, Mr. Domonique Spears. The Corvus brand entered the state of Tennessee less than one year ago, and Mr. Spears’ influence on the up-and-coming market has not gone unnoticed.

Mr. Spears’ cleaning experience goes back to helping his older brother clean the school where he worked. Then, just shortly after graduating high school, Mr. Spears got a job at the Vanderbilt University Medical Center, where he went on to work for five years. In a recent interview with Nashville’s Regional Director, Mr. Jonathan Frias, they discuss how this experience primed him to clean at a high level and provide top-notch customer service.

Since the start of his Corvus Franchise, Mr. Spears’ strategy has been to clean Nashville’s smaller accounts. And according to Mr. Frias, this approach has worked out very well. “He listens to the advice we have given him. Dominique is always willing to learn and get better,” he says.

Mr. Spears works another job in addition to his Corvus Franchise, making it challenging to meet up for last-minute changes that arise. But even though his work schedule is demanding, he still manages to make it work. For example, Mr. Spears was more than willing to meet up with Mr. Frias on a Sunday for an initial walkthrough of a new customer account. Talk about an impressive work ethic!

Thank you, Mr. Spears, for all that you do for Corvus! We look forward to watching your continued growth and success.